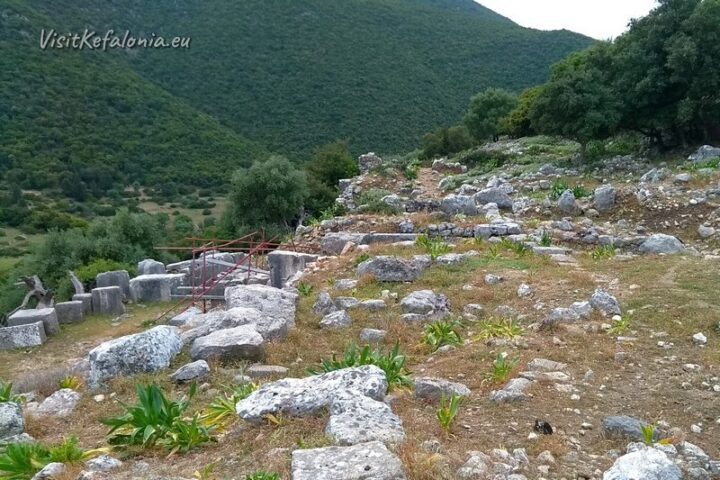 Castle and ruins of ancient Sami is located here

Writings taken from the information board at ancient Sami site:
Ancient Sami, built deep in the natural bay, was one of the four cities – States of the “Cephalonian Tetrapolis” which flourished during the Classical and Hellenistic period (5th to 2nd century. BC).
As an independent and autonomous city, it exercised its own foreign policy and cut its own coins on which its name was depicted. The economy was based on shipping and trade, while the city’s inhabitants involvement with farming and animal husbandry was also important. Its two citadels occupied the tops of the hills “Paliokastro” and “Agioi Fanentes”. While the city expands on the foothills at the locations of “Loutro” and “Kaminia” respectively.
Its impressive fortifications surround the two hills and reach the coast line following a line parallel to it.
The most impressive remains of the fortifications that have survived until today are:

The independence and autonomy of the city of Sami was disrupted in 188 BC after a four month siege by the Roman troops led by the Roman consul Marcus Fulvius Nobilior. Through all that, the city prospered once again from the 1st century BC till the 3rd century AD. Despite during the Byzantine period, as the area continues to be inhabited, the walls are being repaired and the tower of Agioi Fanentes became a part of the homonymous monastery.