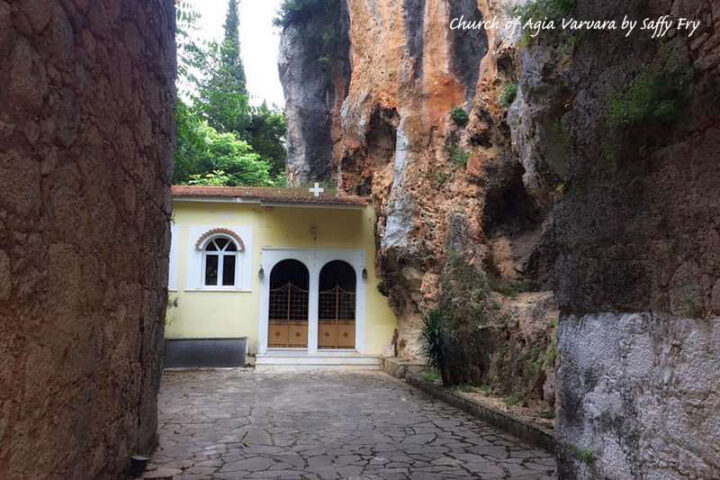 The church of Agia Varvara (Saint Barbara) is located over the water from Argostoli, just off the road heading towards Razata.
According to tradition, in around 1912, a small child fell from a great height into the gorge where the church is today. Apparently the child was unharmed and said that a woman wearing white was with him whilst he fell, helping him safely fall to the ground.

From that point onwards, the villagers say they saw a burning flame on the spot where he landed and regardless of the weather condition, the flame never went out. After a few years some of the villagers found the courage to explore the spot surrounding the mysterious flame and entered a cave, discovering an an icon of Saint Varvara. They believed her to be a miracle and took her to Argostoli, where, according to tradition, she stopped a great epidemic that had broken out and killed many people.

In the cave, a chapel was built in honour of the saint, which you can see from the roadside. The icon disappeared – most likely stolen a few years later, in 1935.
Because of the miracle she performed the Saint is known as the protector of Argostoli and each year the Chapel celebrates on December 4th. According to the custom, the believers boil wheat and offer it to the congregation, in memory of the salvation of the island from the epidemic, thanks to Agia Varvara.