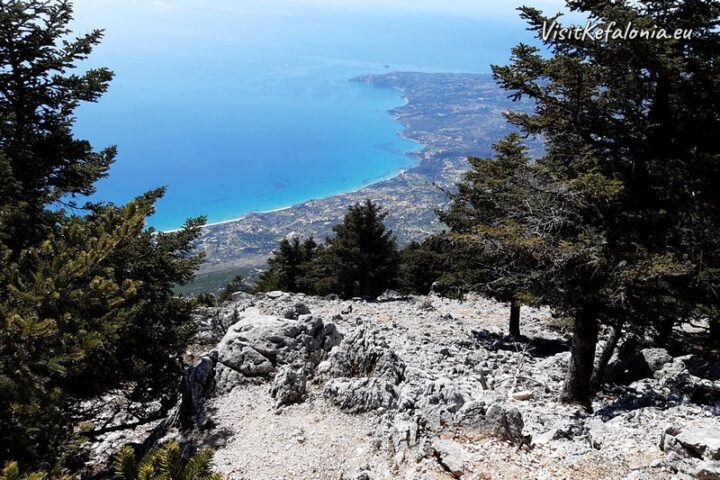 Mount Aenos or Ainos is the tallest mountain on the Ioanian island of Cephalonia, Greece, with an elevation of 1,628 metres.
Its bedrock is dominantly dolomite and limestone of Cretaceous age.
Most of the mountain range is designated as a National Park area and is covered with Greek fir and black pine. Pine forests are found between the elevations of 700 to 1200 m.
Semi wild ponies inhabit its forest. On clear days, the view includes the NW Peloponnese and Aetolia along with the islands of Zakynthos, Lefkada, and Ithaca.
No ski resorts are found on this mountain range, but there are beautiful caves to be seen in the north.
A highway passes over the mountain range connecting traffic from southwestern to the eastern part of the island is one of the few roads going into the mountain range.
Approximately 3,000 to 4,000 people live on the slopes of Ainos.

The easiest way to get to the summit is to drive along the Mt Ainos road from the North West to the transmitter station. Leave your car here and then continue along the dirt track on foot for about 10 minutes until you reach some steps to the right and a sign post. Go up these steps for another 10 minutes to reach the summit. A concrete post at the summit has a metal container strapped to it, this contains a visitor book.

Along this trail, there are many great spots from which to take some photos.