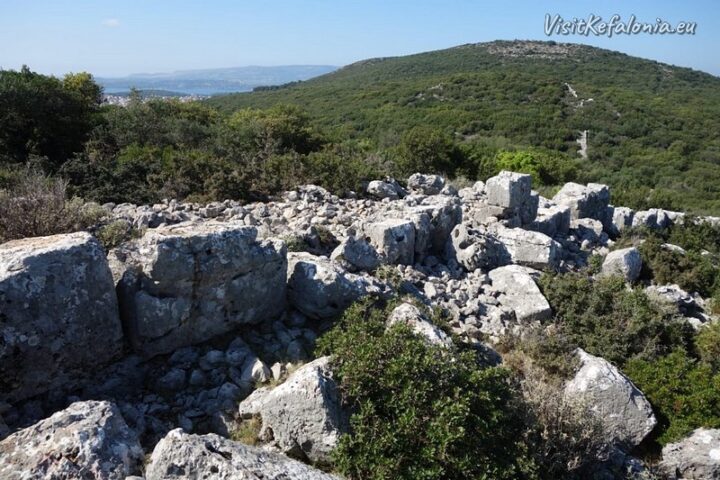 The Ancient Walls of Krani is located here

Writings from the onsite information board:
The ancient city of Krani is located on the south eastern side of the Gulf of Koutavos, 1km away from Argostoli. It’s habitation had already began as early as the Neolithic times.
It was one of four cities – States of Kefalonia and during the Classical and Hellenistic period (5th to 2nd century BC) controlled the entire western part of the island.
Its fortification consists of four parts of walls, while the most striking amongst them, is the northeast one, in Razata. The citadel is built on the hills Castelli” and “Pezoules”, which are separated by an internal wall, forming a two-peaked citadel.
The north eastern front is supported by a large rectangular tower, with two gates, one of which was repealed and was built by a wall during the Roman period. The walls are built according to the polygonal and trapezoidal building system.
In the south of the citadels and across the slopes, there are ruins of ancient buildings cross the wall in Razata was built to further protect the citadel of Krani against the rival city – State of Sami. It essentially consists of a fortified line which runs along the hills of “Logos” and “Tragalo Vouni” and is about 1080m long and 4m wide. It’s reinforced by 22 towers and is built of enormous stone blocks of local limestone according to the polygonal and trapezoidal building system.
The difference between the 8th and the 9th tower shows the transition from one system to another. Two large gates are formed upon the wall of which the one in the centre forms a Dipylon (Dipylon: two gates amongst which, a central tower is prevalent).
One can also notice smaller gates next to some of the towers. In general, the fortification of Krani constitutes one of the best preserved fortified wall samples and one of the most impressive of the architectural specimens of that period.
The city survives even after its surrender to the Romans in 189 BC and during the Byzantine period, a wall was built to support the citadel on “Castelli” hill.